The Diversity of the German Program DSD at Huamei International School in 2017/2018 Semester
Shared :

Guangzhou Huamei International School has been selected by the Federal Republic of Germany as one of the only four schools in Southeast China to offer the DSD program (Deutsches Sprachdiplom).  In 2009, Huamei school started the German DSD program by offering German courses as a second foreign language in the primary school. In 2010, the German program was introduced to the secondary school. It seeks to extend students’ cross-cultural communicative abilities and help students build up the language foundation needed to study in German speaking countries.

I am an intern from the University of Cologne. Since Huamei International School (HMIS) and the University of Cologne (UC) started to cooperate in 2015, my university sends students of the Teaching Academics focus to HMIS on a regular basis. Having graduated with a Bachelor’s teaching degree, I applied for the internship program and received the offer to teach at the secondary school section starting with the 2017-2018 school year. The welcoming and helpful people at this school – whether teachers, directors, coordinators of us international teachers, canteen staff, security guards or students – gave me a very comfortable feeling when I started to work here, and this warm spirit remains until today. Having taught one semester of the DSD program at HMIS, I can witness the effort of all German teachers, both from Germany and China, in preparing and providing lessons and activities to conduct the program in the best way possible. The outstanding German language level of my colleague Silvia Zhang proves the program’s well-selected teachers for its professional conduction. Outside of class, Ms. Zhang and I communicate fluently in both German and Chinese.

The work in a team with Ms. Zhang, our supervisor Claus Huxdorff, and me turned out exceedingly smooth. Mr. Huxdorff, the public officer sent by Germany to manage the DSD program at HMIS, guides us to improve the quality of German lessons every day. Every single detail of a better way to formulate the exercises we constructed and the way a new topic should be explained in class is advised to us by him in order to provide a comprehensive and, at the same time, challenging lesson for our students. Moreover, the classes of junior 1 (grade 7) and junior 2 (grade 8) are each divided into two groups which are taught separately: a group of a higher level of complexity and another with a lower level. This division aims to adjust more precisely to the students’ individual learning abilities, to both challenge them and to provide them with additional exercise if needed. Also, the students can switch between the groups with our permission or advice based on their performance in their tests and exams. Depending on the occasion, both groups are sometimes taught together by Ms. Zhang and me or by Mr. Huxdorff.

In the first semester of the 2017-2018 school year, the students of junior 1 and junior 2 have learned these topics:

· Family – including: family members and family lifestyle in Germany

· Professions – including: your dream job and comparison of the salary for specific professions between Germany and China

· Hobbies – including: your hobbies, common free time activities in Germany, and vacation

The grammar is taught parallel to the topics. In this semester, we have focused on the following areas:

Every second week, the students write a test on the newly learned topic while applying the new grammar in their writing.

Apart from learning the German language in the classroom, we ensure the best opportunities for our students to experience the German language and culture in various kinds of ways. On December 6th, 2017, our junior 1 and junior 2 German classes performed on stage for the secondary school’s talent show. Junior 1 took classes with our music teacher Eleni Stamboli once a week since the beginning of the semester. After they learned a few German songs, they chose to sing the song “Im Frühtau zu Berge wir zieh'n fallera...” for the talent show.  Junior 2 recited the ballade “Die Ballade vom Seiltänzer Felix Fliegenbeil“ by Michael Ende on stage, for which Ms. Zhang has given a lot of effort to ensure the right students’ right pronunciation and tone, their upright and representing body language, and – most importantly – their understanding of the ballade.  It was the students’ task to draw the story of the ballade and the best ones were turned into an animation which was shown on the stage’s screen while the students were performing the recitation. Thus, the German program at the middle school was represented two times, providing both the students and the audience with two slightly different ways of experiencing the language. 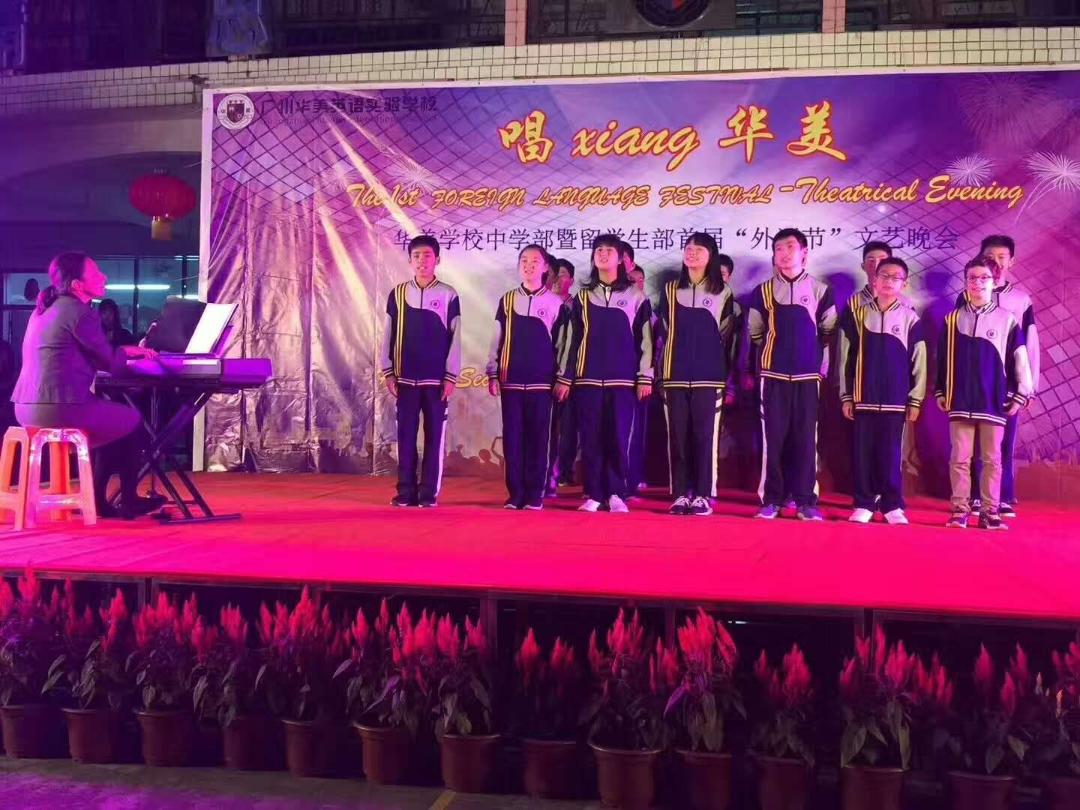 On December 21st, 2017, there was the huge annual New Year’s Culture and Arts show of HMIS, which included performances from the kindergarten to the high school section. All sections of HMIS were allowed to apply and 20 performances were selected in the rehearsal in November for the show in December. My female students from junior 1, who I was teaching a dance to the song “Wie schön du bist” by Sarah Connor, were among those selected. Since dancing is my hobby but I am not a professional dance teacher, and the students did not have any dancing experience at that time, it was a challenging task for me to attain competent dance training skills and to invent a dance with steps considering my students’ abilities at the same time. I was delighted by their eagerness to learn the steps and to sing the song. Even though they were exhausted after a long day of lessons every day, they did not give up and were happy about additional dance classes during the week. Being nervous on the day of the performance was self-evident. Our performance was a success and it is an experience which neither my students nor I will never forget. Now I understand it even slightly better when one says that it is the greatest reward to a teacher to finally see their students achieve their goals. Sometimes I still hear the girls from junior singing the lines of “Wie schön du bist” or the boys singing the songs they have learned in the last months.

The very next day, on December 22nd, 2018, we celebrated Christmas with our junior 1 and junior 2 German classes. The students were introduced to German Christmas traditions and songs with an illustrative PowerPoint, including: outside and inside activities in the snow, the ways to celebrate the time before Christmas and the Christmas days, goods at the Christmas market, baking Christmas cookies, decorating their house and their own Christmas tree, traditional Christmas dishes and so on. While we were explaining these traditions to the students, they did not only ask may questions out of interest, but also expressed their wish to experience a Christmas like the German one. After that, the students could create their own Christmas cards with handicraft paper and write their own Christmas sayings and wishes into their cards as a memory. These different ways to experience the German program at HMIS increased the students’ interest in German culture and the effectivity of applying the language in various occasions. On January 8th, 2018, the students will write this semester’s final exam in German as they do for each semester every year. This exam is designed similar to the DSD exam, however, still based on the language level they are supposed to have reached by now. Thus, the final exams each semester prepares the students for the real exam. Once they pass the DSD I or II language test at the end of their path at HMIS, they are immediately allowed to apply for colleges (with DSD I) and universities (DSD II) in Germany.

As we – Mr. Huxdorff, Ms. Zhang, and I – are eager to continue our teamwork and pursuit for the best possible performance of our students, I can guarantee that the DSD program is and continues to be in good hands.