Author: Lars Jirmann
On 18th December 2019 Mr. Jirmann and  the students of grade 5 class 4 in HuameiInternational School welcomed some special teachers to their German lesson. Incooperation with the Guangzhou Foreign Language University a group of eightMaster degree students in German translation, linguistics and philology tookthe role of teachers for this extraordinary lesson. The university students were led by their lecturer Mrs. Dr. Anja Döscher, inconducting a class on listening and dialogue on their own with small groups ofprimary students.

Dr. Döscher and her students have beenpreparing the lesson for two weeks, utilizing most recent research on foreignlanguage didactics and methodology. The lesson  was held almost exclusively in German,challenging the  school students tocommunicate with their university counterparts in a foreign language and usingtheir already gained skills to master different objectives. The lesson startedoff with a small warm-up during which the school students were assigned totheir respective groups and teachers. This was followed by a vocabulary drillin which pictures of food needed to be assigned to the corresponding word.

As the main objectives were listening anddialogue, the university students then performed a conversation in front of theclass. After listening to the conversation Huamei students had to answer shortcomprehensive questions about it. Then they turned back to their groups andpracticed the conversation with the help of prompts together.

This exercise was followed by anotherconversation, which used a more advanced sentence and grammatical structure,again first performed by the university students and then practiced togetherwith Huamei students.

The final exercise consisted of a longerconversation  of university students at alocal market. Huamei students  needed tolisten carefully and write down answers to questions about the conversation. Thiscooperation between Huamei  InternationalSchool  and Guangzhou Foreign LanguageUniversity was a great success. Feedback from Dr. Döscher and all her students was very positive and the university students enjoyed beingin the role of teachers. The students of grade 5 class 4  took a lot out of the lesson and both sidesexpressed their wish to have another one in the future. 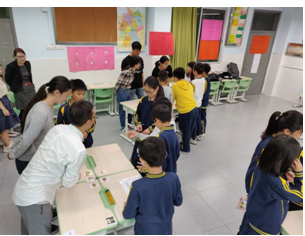 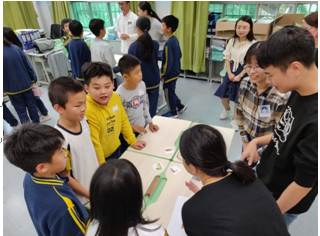 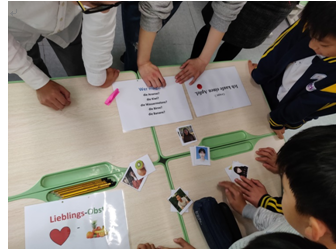 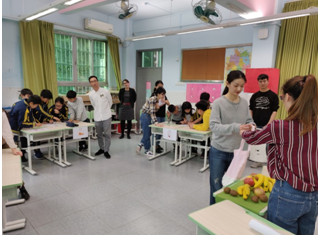